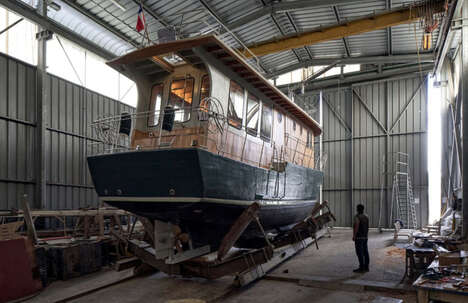 This 1970s Chilean boat was brought back to life thanks to the efforts of the Chilean architect Guillermo Acuña who is the principal of the internationally known firm Guillermo Acuña Arquitectos Asociados, or GAAA for short.

The Kon-Tiki boat was originally built in the early 1970s and was used to fish and harvest wood. It featured an open-air cabin and a small engine room. The boat is 14 meters long and its contents are spread across three levels. The restoration process, of course, sought to preserve some of the vessel’s historic features. The upgraded version boasts “a restored hull with an expressive wood cabin, an expanded deck space, and a ‘modern’ distribution plan.” Guillermo Acuña seems to have put a lot of care into restoring this vessel as he states that the 1970s Chilean boat “carries the memory of the forests.”