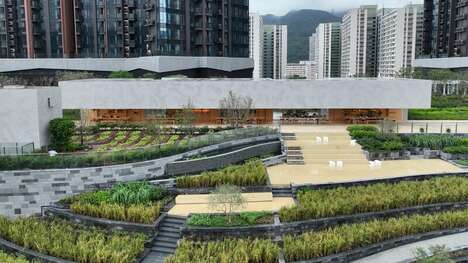 Architecture design studio Snøhetta creates a new urban farm that is surrounded by three clubhouses specifically for the Pavilia Farm development in Hong Kong. It is inspired by the mountain space around the location and the Shing Mun River nearby. It aimed to create a calm ambiance and act as a serene sanctuary that closely connects those to nature amidst being in the busy city.

Two of the clubhouses, which include the Tea House and Farm House are open to the Pavilia Farm residence. The third, which is the Sky House is going to be completed later this year. Managing director and partner of the studio Robert Greenwood notes that “With this project, the Tea House and the Farm House create a green lung in the middle of pulsating Hong Kong – a space where all the residents can find peace and calm, but also interact and connect with each other.”